All the “Bear” roads were developed in 1989, Jarvis Way in 1991, and Shannon Circle in 1986. The Trust developed the trails, working with the developers and the town to preserve and extend existing paths. Look at the map and trace a line from Vose Road in the north, then along Polar Bear Drive, and to the trail that ends on Griffin Road just west of Jarvis Way. According to The Westford Gazetteer, these trails used to be a continuation of Vose Road, which ran all the way to present Griffin Road.

This trail has parking and a trailhead post at both ends. After skirting a low area, the trail becomes more obvious. Near the halfway point, it crosses a small bridge. To your left is the headwaters of Butter Brook, which flows right on its way to Nashoba Brook in Acton. Soon after, a side trail leads right to a backyard. Follow the blazes left up a small incline. The trail ends across a small open area that may be choked with weeds. Head for the trailhead post. In the reverse direction, veer left from the obvious trail, through the open area.

This trail is flat and wide. That’s because it used to be an extension of Vose Road. Little Bear Hill rises to 331 feet on the right, more than 110 feet above the trail. About one third of the way, a trail leads left to the end of a peninsula, where a straight in the marsh can be crossed via two log bridges to the left of the more obvious ladder in the mud. Further on, three trails lead right, steeply up Little Bear Hill, and the trail passes the cul-de-sac of Black Bear Lane. It ends at Old Lowell Road, where Vose Road continues.

The southern end has three trailheads. Little Bear Hill Road has a trailhead post visible across a lawn. Griffin Road access is to the east of a tall electrical box, between two stone walls. This southern end of the old Vose Road is usually overgrown. Jarvis Way has a trailhead post and passes on a manicured lawn between a stone wall and a fence. The main loop runs north between Little Bear Hill Road and Jarvis Way. It is easy to follow until near the northern end, where more care is required. Soon after the small bridge, a junction leads left to private property and right to continue the loop. A few steps prior to a jog in the trail, a trail leads left (see next section) to Shannon Circle. The loop ends at the northeast part of the Jarvis Way loop, where you’ll see the picture next to the map.

This trail leads from the eastern part of the Jarvis Way loop trail to Shannon Circle. It has a jog at a stone wall near the western end, and is easy to follow.

This is perhaps the least used trail, and care should be exercised in following it. In 2017, trail stewards constructed a new entrance on Shannon Road, rerouted the trail around a massive blowdown, and reconnected it with the rail trail at the end of a guard rail. A stream crossing near Shannon Road may be difficult in spring. As you pass the blowdown area, with large trees piled on each other, imagine the storm that caused this devastation. As you emerge onto the Bruce Freeman Rail Trail, cyclists and walkers may look at you like you just emerged from the Twilight Zone.

There is off-road parking at the ends of Koala Bear Lane and Polar Bear Drive. Each lot allows two cars, or four if you are comfortable blocking in two of them. Both Little Bear Hill Road and Shannon Circle are wide enough for on-street parking. The trails will be described in five parts.

Parking, trailheads and trails for Griffin Road
Click a parking or hiker icon for directions. Click and drag to scroll. 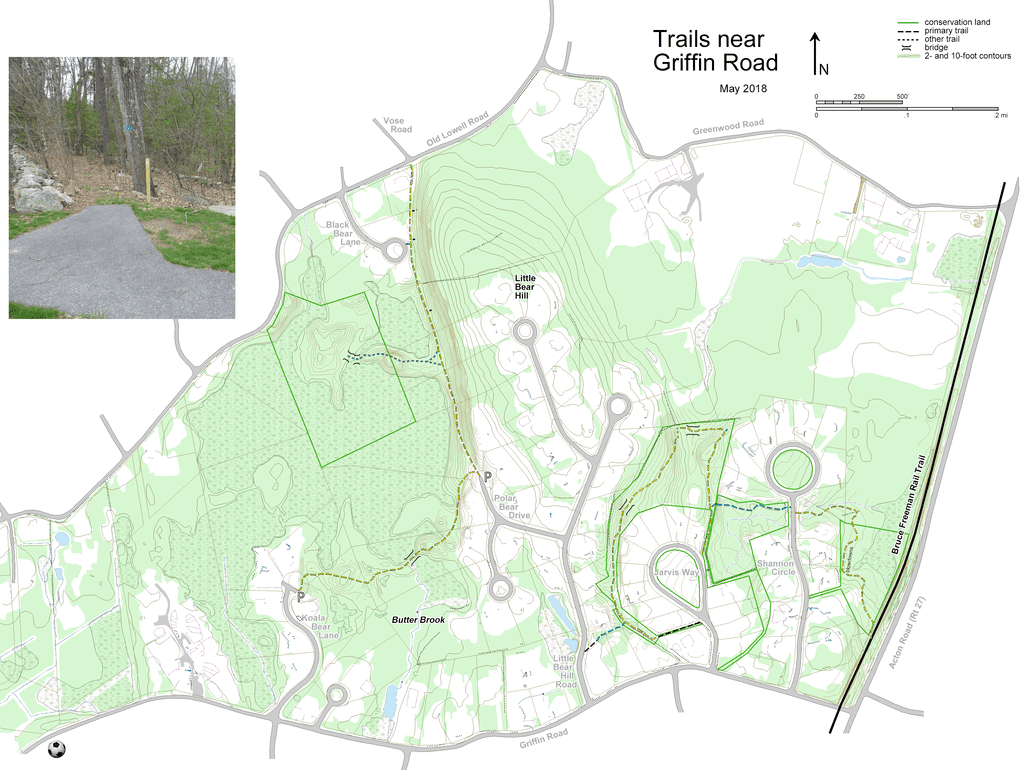