The trail from Cummings Road to the north end of the Abbot School has been in use since at least 1991, according to Trust notes. It is notable for the number of bird houses that have been placed on and near the trail, most of which are seen around the map. In recent years the white blazes have become less distinct, although the trail can be followed with some care.

This guide describes the trail from the Abbot School. The first thing you notice is a wall of bittersweet, an oriental invasive plant, Celastrus orbiculatus, that grows up and around its host tree and eventually kills it. (If you find this in your yard, manual and chemical eradication methods can be found on the internet.) The trail descends below the flat, fenced play area and turns left to parallel Depot Street. Shortly you come to a junction near an old foundation and spring. Was this once a pump house? There is lots of pachysandra there, perhaps planted near the structure, perhaps escaped from a nearby lot.

Continuing straight at the junction, you follow an old woods road or cart path. This may have been used to bring the water to someone's kitchen or garden. The path ends at the corner of the school property. Shortly before the end, an unmarked trail bed can be followed downhill. The is the only improved trail in this network. There are 4X4 timber steps held in place with rebar, and two simple bridges across wet areas. This trail ends near a back yard, but could be extended to cross the mini ravine to join the loop trail described later.

The main trail turns right at the junction and closely follows a stone wall on the right. The bird houses can now be seen at regular intervals. Some appear recent, some are fixer-uppers. When you see an intersecting stone wall, it's worth a close look. A granite pillar at the intersection has a small Drill Hole on top. This marker, designated DH on property maps, is a control point placed and used by surveyors to denote a significant boundary. The next time you walk in your neighborhood, look at the ground at a street corner or near any property border, and you may see the top of a similar post at ground level.

When you see a double blaze, there is a trail to the left that makes a loop with the main trail that continues straight. Following the stone wall, the blazes become less visible but the trail bed is clear, and it never strays far from the wall. Look carefully for the other end of the loop path. Shortly after it, you'll cross a stream formed from the runoff of the spring uphill. At this writing, there is a large blowdown that impedes your progress north. The trail blazes reappear soon and it is an easy walk to the Cummings Road trailhead, which is also signed. You've dropped 100 feet in elevation at this point, and walked 2,000 feet from the school. How's your high school trigonometry? That's an average 2.9 degree slope. Easy!

The loop path, on the return, keeps the stream on the right and has to be followed with care as it is less used. Look for the trail bed that is usually distinct. Faded circular blazes are sometimes visible.

Parking, trailheads and trails for Abbot Trails
Click a parking or hiker icon for directions. Click and drag to scroll. 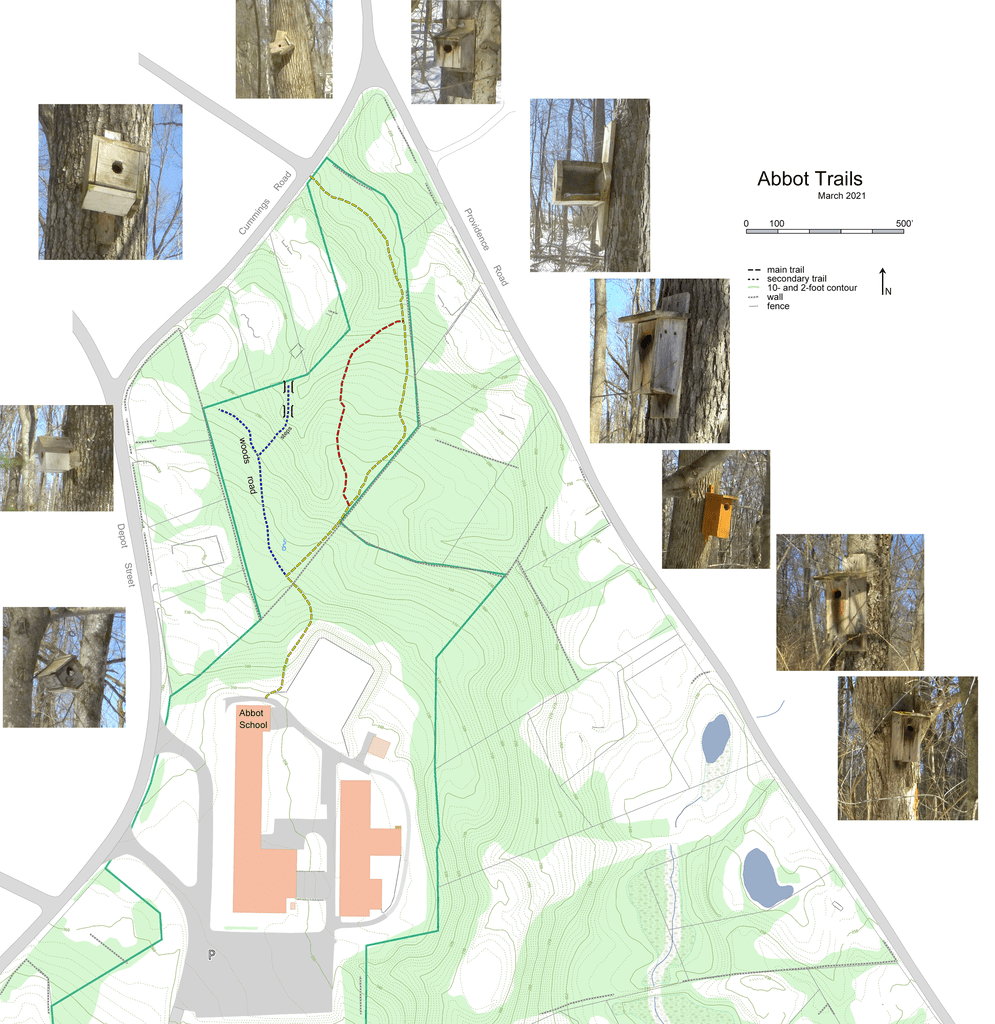