Trails through forests and fields and along waterways in Westford are used in a variety of passive recreational activities like hiking, jogging, bird watching, horseback riding, and cross country skiing. While construction projects have proceeded at a bewildering pace, a program aimed at protecting and preserving trail areas in Westford, begun in 1982, has evolved into a wonderful townwide trail system. Currently trails development and maintenance is an ongoing program of the Conservation Commission, the Westford Conservation Trust, and the Planning Department. 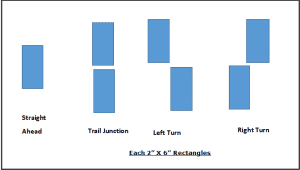 The Westford Trail System is intended for passive recreational activities, including walking, jogging, horseback riding, and cross country skiing. In considering the possibility of motorized uses such as motor bikes, it was found that landowners generally object to these and would not grant easements for such uses. As a result, the existing trail easements do not extend to motorized uses. Dogs should be on leashes so that they aren’t disruptive, especially when walking near houses.

Do you frequent trails in town? Explore new areas beyond the same old trails!  Become a frequent hiker! The Westford Conservation Trust now has a recognition program for dedicated hikers like you. If you visit every one of the hiking areas in the 13th edition of the Westford Trails guide book*, you qualify for the Explorer award. Hike every trail in town and receive the Redliner award.

It’s amazing to see how vigorously branches and leaves grow in Westford, particularly in the spring. Sometimes a branch or a tree will fall on a trail, and then nearby bushes and vines quickly fill in the area. It’s not unusual for a trail to almost disappear unless some clearing is done periodically.

For the past several years, trail clearing and land stewardship have been coordinated by the Conservation Commission and the Conservation Trust. A sizable group was formed, called the “Westford Land Stewardship Committee.” In 1999 the group carried out a major effort at the town owned Slifer parcel.

The Land and Trails Stewardship committee invites others to join this group of outdoor-minded people. We hope you’ll contact us if you are interested in becoming a land steward, or would like more information on future organized efforts. If you have special equipment, such as a chainsaw or a truck, so much the better.

In fact, all trail users should feel free to clip back invading branches so as to keep their favorite trails open and attractive. This applies just to the sanctioned trails. If on the other hand, you’ve had trouble following a particular trail, we would appreciate your sending us a message describing your experiences. This would help us to realize where additional marking or clearing would be most useful.

Development of the Trail System

One of the first steps in trail planning was to map existing trails and from this to identify major trail routes or arteries. This mapping was carried out in cooperation with a multi-town trails project initiated by then State Representative Walter Bickford. Trail routes in Westford were coordinated with corresponding planning efforts in Littleton. Through similar coordinations, the Bickford plan envisioned continuous trails extending from town to town without breaks at town lines. Within the town of Westford, the trail system concept is to include all of the town rather than just one or two major open space areas. Ideally, these trails will be accessible from all of the residences throughout the town, providing links with the major open space areas and with other trails.

The permanently preserved trails are located on land owned by the town, land owned by the Westford Conservation Trust, and connecting trail easements. In addition, the state’s rails-to-trails project, “The Bruce Freeman Trail,” near Route 27 will constitute a valuable connection and a beautiful trail in its own right. This is now being incorporated into the Bay Circuit Trail, which is a long distance trail, extending from Ipswich on the North Shore to Duxbury on the South Shore.

The appropriate length of a trail varies considerably for different trail uses. For walking a dog, recuperating from an illness, or other short walks, a trail of less than a mile, preferably in a loop, is suitable. Among the longest distance trail users are horseback riders, who often cover 5 to 20 miles in one ride. In between, cross-country skiers typically travel about 2 to 5 miles. For walking to and from school, both long, and short trails are useful to accommodate the different neighborhoods. An ideal trail system should have numerous branches and loops in addition to the main long-reaching arteries.

The first two trail easements were granted by Blair Finnegan and Roy Smith. The Finnegan trail passes through the Evergreen Circle subdivision, and is a link between town-owned land on Boutwell Brook to the east and the Town Forest to the West. The Roy Smith trail passes through the extensive open space area (98 acres) of Blanchard Farms, a condominium neighborhood near the center of town. Roy Smith subsequently granted an additional trail easement which connects the Blanchard Farms trail to Main Street, across from the Town Hall, and another trail easement passing through the Ledgewood Drive subdivision. Together these four trails connect with town owned land to form a continuous trail extending from the Town Hall all the way to the Russell Bird Sanctuary and the Stone Arch Bridge in Graniteville. The Stone Arch Bridge is an impressive structure, built about 1872, entirely of granite blocks without mortar.

The original four trail easements have been supplemented by a large number of additional trail easements throughout the town and by several major land acquisitions by the town and others by the Westford Conservation Trust. Moreover, the Planning Board is developing a unified trail system focusing on the Farmer parcel along Stony Brook and the abutting Mass Electric Line.

Altogether there are now over 50 permanent trail easements. These have been made possible by the generosity of a large number of community-minded individuals and corporations. Trail connections now have been made with Littleton (along Beaver Brook), Chelmsford (on Francis Hill), and Carlisle (on Rail Tree Hill).

The trail easements that now exist together with the town-owned and Trust-owned open spaces provide a substantial network of trails for passive recreation. New trails have been added in every year, and more are expected. These additional links will provide alternate routes, additional access points, and a greater number of loops so that we can leave and return by different paths. It will also increase opportunities for children to walk to and from school, and provide more variety in where we can walk. In many ways the trail system is becoming better and better.