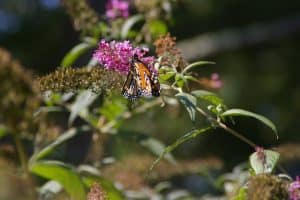 Have you seen any Monarch Butterflies this spring? I haven’t, and if last year is any precedent, we won’t see many this spring and summer either. Monarchs are declining precipitously. Experts estimate that these migratory butterflies have declined by 90% in the past twenty years. The Mexican Oyamel Fir Forest, monarchs’ wintering habitat, has shrunk from 44 acres twenty years ago, to 7.19 acres last winter. Monarchs have lost a lot of wintering habitat, but even more importantly, they have also lost much of their migratory habitat. When Monarchs leave Mexico in the spring, they fly up the central flyway to the mid-west. When they arrive, they seek out the only food plant their caterpillars can eat, milkweed, on which to lay their eggs. Twenty years ago they found native prairie and hedgerows along the edges of farm fields that produced a bounty of milkweed. After laying eggs in the mid-west, many of the next generations of butterflies flew on to the east. More recently, farmers have used powerful herbicides and pesticides on their fields, have planted most of the native prairie in corn, and eliminated hedgerows between fields. The result is far fewer monarch caterpillars and therefor far fewer adults flying to the east coast. Declining prairie habitat is also a problem for grassland birds and other pollinators. Monarchs on the west coast also have a 90% decline in their numbers. This population migrates from Canada, Washington, Oregon south to southern Baja California for wintering. They too have a hard time finding milkweed plants on which to lay their eggs on their way back north in the spring. Environmental Defense Fund’s website states that Monarchs are “dangerously close to extinction.” David Wolfe, EDF director of conservation strategies wrote in a Houston Chronicle article, March 1, 2017, “There is general agreement that habitat loss and fragmentation-particularly in the Corn Belt and Great Plains regions of the U.S. are among the primary factors for monarch decline.”

Wildlife protection organizations have swung into action. In 2018, the Environmental Defense Fund, partnering with the US Fish and Wildlife Service, and Monarch conservation groups in the western states, have launched the new Monarch Butterfly Habitat Exchange Program, focusing on Iowa, Missouri, Texas and California. The voluntary program determines the habitat value on each property, and then enables incentive payments to farmers and other property owners for habitat restoration. Restoration methods may include mowing or prescribed burns to discourage woody vegetation, milkweed planting and prairie restoration. Farmers who are finding it difficult to grow traditional crops due to climate change, overproduction, or high tariffs, may find these habitat incentive payments to be the answer to their cash flow situation. Plantings along interstate highways in the central fly way, are also creating butterfly habitat. The National Wildlife Federation is encouraging people to plant milkweed where they work, live, or go to school, even in cities. The NWF’s Garden for Wildlife Program awards recognition and certification to people whose gardens provide habitat for monarchs and other wildlife. Check out their website for more information on the program. The U.S. Fish and Wildlife Service website suggests, “Start by planting milkweed and nectar plants that are native to your area. Garden organically to minimize your impacts on monarchs, their food plants and other pollinators. Become a citizen scientist and monitor monarchs in your area. Educate others about pollinators, conservation and how they can help.”

Many thanks to all flora and fauna reporters for the month of June. Please send reports by July 26 for inclusion in next month’s column. You can call me at 692-3907, write me at 7A Old Colony Drive, or e-mail me at mariancharman@gmail.com.

Jim Kay, Flagg Road. January 13, barred owl observed for most of the day on Flagg road, sitting on a branch in the sun.”

Sunny Killoran, Pine Ridge Road. May 26, house wren singing loudly from the branch pile and picking out sticks for nest.

Andrew Bourget, on Hunt Rd., May 26, a pair of barred owls. On Chamberlain Rd., a brown thrasher.

Sue/Bruce Bonner, at Juniper Hill Road. May 28, female turkey came out on road, followed by ten tiny baby turkeys. They were unable to jump up the curb on the other side. Mother came back and scurried back and forth hopping the curb on each side. “The tiny chicks trying to follow her became very confused also….Bruce stopped the car and got out….he walked slowly down the road  as she kept going back and forth ahead of him….She eventually worked her way down the road, going from one side to the other, until she got where the curb ended for a driveway. Then she went up the hill from which she had originally come down, and all ten chicks followed her up into the woods.” [Thanks Bruce! MH]

Marian/Bill Harman, Old Colony Drive. May 29, five lady’s slippers just putting out their leaves by the sidewalk along Old Colony–so late! May 30, fledgling day! As I walked to the beaver dam, I surprised mama wood duck and her six ducklings. She gave  quiet and insistent alarm calls and there was a great frothing of the water as she led her ducklings rapidly into the reeds. What a treat to see them. Also, a big commotion of grackles in the brook. I went to see and found that many young were calling and chasing their parents who were trying to keep up with the feeding–seemed like a simultaneous fledging. Also heard catbird, vireo, oriole, red-bellied woodpecker, common yellowthroat.

Marian/Bill Harman, Old Colony Drive. June 3, dragonflies and barn swallows flying over the meadow. Twenty or more pink lady’s slippers along the path to the Wright Cemetery. June 4, broad-winged hawk flew into a pine by Keyes Pond. June 5, eastern wood pee-wee singing in the woods. June 10, walk to the swamp: grackles all upset by me on the trail–probably more babies fledging. Then a great blue heron flew in and they and the Canada geese (also on a nest), got all upset by the heron. June 16, osprey flew over Keyes Pond. At the feeder, cardinal, goldfinches, red-bellied woodpecker. They can hardly get any food because the many grackles and red-winged blackbirds take it all. The hummingbirds are brave and get their food just fine. June 21- a male rose-breasted grosbeak at the feeder. American crow coming to get suet from the feeder now. Its the only bird that can scare the grackles away. June 22, a walk to the brook and meadow. Singing cardinal, song sparrow, phoebe, common yellowthroat, catbird, downy woodpecker, chestnut-sided warbler. Blooming: partridge berry, (smells beautiful when a large number are blooming) hawkweed, heal-all. Saw several witch hazel trees, I hadn’t noticed before, royal fern, interrupted fern and sensitive fern.

Barbara Theriault, Tadmuck Lane. June 8, in the back yard, a doe and very young fawn that could hardly sand up on its spindly legs. June 25, one deer walking across back yard. Most evenings, between 9 and 10, the howling of a pack of coyotes in the neighborhood.

Marilyn Day, Cold Spring Rd., June 11, took a photo of a large snapping turtle that was killed on the road.  “Poor thing, I feel very sad.”

Roberta McGuire, Chamberlain Rd., June 11, “I woke up to a cloudy, rainy day. Opened the window shades and saw a hummingbird feeding from our purple Siberian iris plants which are in bloom.”

Rich Strazdas, at Cold Spring Road. June 23, a hawk fledgling in the middle of the road. [Rich took a good photo and Audubon identified as a red-tailed hawk-MH]

Rosemarie Koester, Providence Rd. June Report: pair of cardinals and blue jays, hawk overhead, house finches, goldfinches, chickadees, tufted titmouse, nuthatches, quite of few grackles that are keeping the other birds away, red-bellied and downy woodpeckers, hummingbirds. Territorial fight between two female hummingbirds at the feeder. One hit the other twice. Also, two male red-winged blackbirds fighting each other. A turkey under the feeder, poked by a red-winged blackbird, which startled the turkey and sent it away. Woodpecker poking at our shingles. A deer in the woods munching on young trees. Saw a mama robin with three of her little ones–“Fun to watch!” A pair of rabbits and one baby rabbit in yard. Woodchuck seen for two days then not seen. Snakeskin in rock wall. Lots of chipmunks that are digging in my potted plants on the deck. Squirrels chasing each other. Heron spotted in marsh. Frogs heard. On North Main Street, swans on the pond. On Route 27, a mama deer with a very little one following her across the road. The cars stopped for them.

Marian Harman is a member of the Westford Conservation Trust, a non-profit organization whose mission is the protection of Westford’s open spaces and trails. The Trust welcomes new members and volunteers. Check out our website at westfordconservationtrust.org, or visit us on Facebook.